On the occasion of the 200th anniversary of the birth of Ignác Semmelweis (1818-1865) the Hungarian Government declared the year 2018 as Semmelweis memorial year. As part of the celebration series, the Semmelweis Medical History Museum honours the memory of the denominator who saved millions of mothers from puerperal fever. The exhibition will first come out at Janus Pannonius Museum in Pécs, where it will be open to the public at the Department of Natural Sciences (Szabadság u. 2) for almost two months. 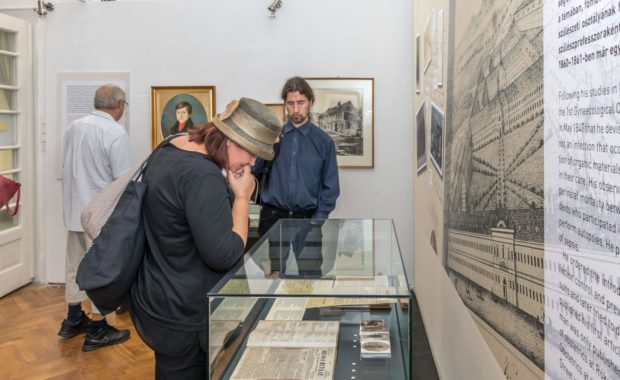 In addition to the well-known pieces of the scientific oeuvre that was added to the UNESCO World Heritage List in 2013, a brief overview of the walk of life can be on view by Semmelweis’s manuscripts and family records that have not been seen by the public yet. Apart from the personal household subjects of the scientist, some of the family’s photo albums help to get acquainted with the everyday life of a physician living the life of   German citizens in Hungary, even though his personality and individuality are still full of secret.

Discovering the true values ​​of the scholar’s oeuvre after his death, and the cult creation wishing to confess his values created a new layer around his figure year by year. Numerous films, writings and fine arts created the iconic size of SEMMELWEIS whose figure is surrounded by the mystique of the ardent scientist maddeningly fighting for his convictions that preceded his age. Who was he then? Can the clichés be removed from his figure? The exhibition also seeks answers to these questions.

The exhibition opened to the public on 7 September at 13.30 and can be visited until 12 November at Janus Pannonius Museum in Pécs at the Department of Natural Sciences  (Pécs, Szabadság u. 2.) from Tuesday to Saturday from 10 am to 4 pm.