Dr Ignaz Semmelweis was a misunderstood man in his own era. People considered him an unpleasant maniac. His family and his colleagues betrayed him, and finally he died in an asylum, murdered by orderlies. His only crime was that he dared to teach new discoveries, he stubbornly stuck to his ideals, and he risked everything to fight for what he knew was the truth. 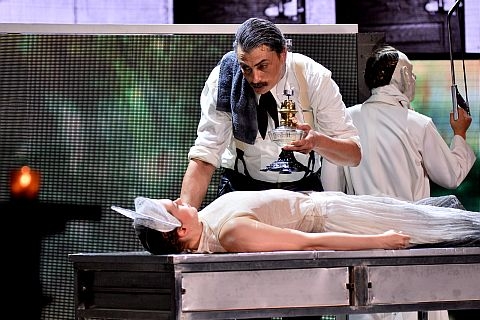 He was the one to discover that doctors, by washing their own hands with disinfectant, could prevent puerperal fever. Mothers died in their hundreds after giving birth, but the members of the medical elite did not want to face their own responsibility: that with their carelessness, they themselves were spreading the infection. In the era of revolutions and discoveries, Semmelweis’ own revolution fell, and a century had to pass before he was named the ‘saviour of mothers.”
The American composer of this world premier, Raymond J. Lustig, and its lyricist,  Matthew Doherty invites the audience into the psyche of Semmelweis, a man struggling with himself and the whole world on the border between reality and imagination. A female choir has a key role in this diagnostic oratory, and the musical solos of Semmelweis’s figure as well as the melodic, often mystical choral pieces – in the translation of the excellent poet, Szabó T. Anna – are accompanied by a chamber orchestra, including a few unusual instruments.
With the support of the Semmelweis Memorial Year.
Resources: Budapest Operetta & Musical Theatre