As a part of the Semmelweis memorial year, a festive concert was organised on 22th September in the grand hall of the Liszt Academy, where under the direction of Máté Hámori, the Danubia Orchestra Óbuda performed four works that were born in the same year as the appearance of Ignác Semmelweis’s main work: The Aetiology of Puerperal Fever. 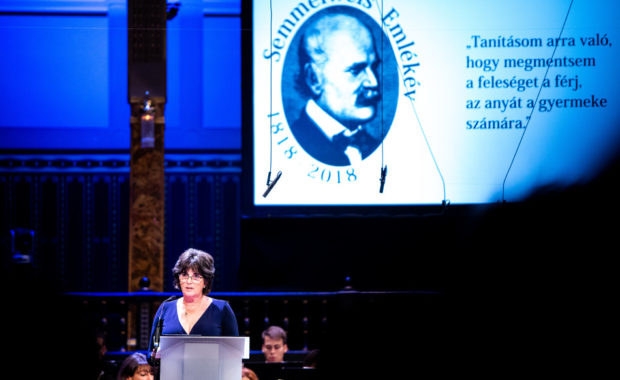 “Ignác Semmelweis is the saviour of mothers and humanity, who lived as one of the most ethic people, and in his fate we can recognise the values ​​of humanity,” the appreciatory words of dr. Miklós Kásler, Minister of Human Resources, were forwarded by dr. Anikó Nagy, State Secretary for Health Care before the concert. – “In all his actions it is possible to recognise the preservation of the freedom of research and the sense of justice. His main aim was to save human life by which his work and oeuvre raised him to the most respected figure in Hungarian medicine.”

She also added that the memory of Ignác Semmelweis puts heavy responsibility on the whole medical society and the university bearing his name.In connection with his name, three sets of values ​​are available in every writing about him, and these are conscientiousness, sense of duty, altruism.

“Music improves our health by effecting our inner senses, it accompanies us for a lifetime: it relieves pain in physical and emotional terms, while helps stress management,” the State Secretary referred to the classical concert. – “Doctors, like musicians, chose a profession. We know that happy is the person who has a cause to take on responsibility and sacrifice for a reason and for a person. This responsibility is lifelong. It is our duty to carry the heritage of Semmelweis further. ”

At the concert, Ferenc Erkel’s opera titled Bánk bán was followed by a piano concert in Liszt A-major with the contribution of the young pianist Ádám Balogh. They were followed by the overture of Mosonyi, and the evening was closed by Brahms A-major serenade.