Rarely seen or unpublished photographs, documents, family relics and manuscripts can be seen at the exhibition of the Semmelweis Museum of Medical History of the Hungarian National Museum in honour of the 200th anniversary of Ignác Semmelweis’s birth. The exhibition opened on 25 May is titled “By His Own Hand – Rarely visible pieces of the Semmelweis Heritage”. 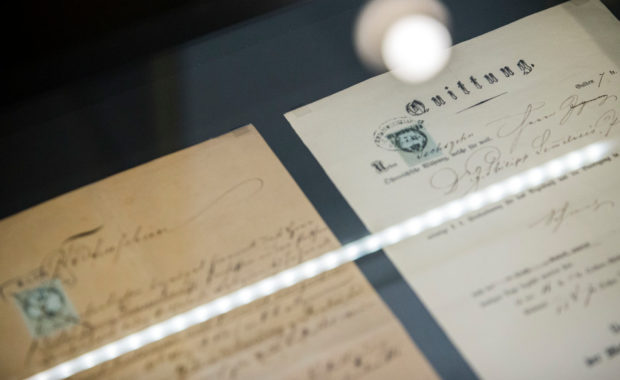 The memory of the figure of Ignác Semmelweis and the history of obstetrics are prominent during the memorial year in the Semmelweis Museum of Medical History. The recently opened exhibition was grouped around the former residence of the Semmelweis family. “We were looking for such family relics and treasures that the public have never or rarely seen before,” said Ildikó Horányi, curator of the exhibition. She added that in addition to the well-known legacy, they can show photographs, documents and manuscripts that are somehow in connection with the saviour of mothers.

The exhibition also covers the circumstances of Ignác Semmelweis’s death, with the help of individual documents as well, said the curator. The objects of the Semmelweis-cult, which formed later, also appear and in addition to the scientific oeuvre, the scholar’s personality and family relationships also gain a new perspective – she listed the elements of the exhibition, including the sculptural head reconstruction made last year. After the exhumation in 1963, it was created in the Museum of Natural History with the help of 3D technology, using the latest anthropological results last year. The exhibition presents the short film which was shot during the sculpting process, as well as several photographs that have not yet been introduced to the public.

Besides the exhibited art objects, a touchscreen makes it possible to become acquainted with those materials related to Semmelweis which are not available at the exhibition this time.

The exhibition is visitable until 31 July in Budapest, Apród utca 1-3. The Semmelweis Museum of Medical History, Library and Archives has a goal to collect, preserve, research and make tools, documents and works of art related to the history of healing and the body available to the general public. In addition, it is an important task to discover the scientific significance of Ignác Semmelweis’s work and to preserve his memory.

The exhibition “By His Own Hand – The Semmelweis Heritage” is also included in the programme of the Night of Museums.