“Ignác Semmelweis recognized the cause of a significant problem and treated it with a simple method”, said Dr. László Lovász. The president of the Hungarian Academy of Sciences revealed that the discovery of childbed fever at its age caused many disputes, his colleagues rejected his views, but today the importance of hand washing is obvious to even a child. Today, a prestigious university bears the name of the doctor whose methods have become widespread with time, added Dr. Lovász. He pointed out that although Semmelweis could never enter the sphere of the Hungarian Academy of Sciences, we still pay great respect to his work. The chairman of the Hungarian Academy of Sciences emphasized that today only evidence-based knowledge is considered to be scientific. The Academy tries to overcome today’s challenges in the healthcare system through the tools of science, he added. 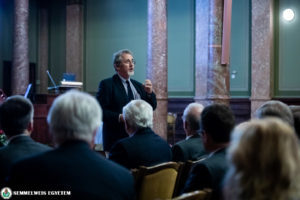 In his welcome speech, the patron of the memorial year, János Áder, President of the Republic, highlighted that Ignác Semmelweis’s practice overtook the theory, with no evidence in today’s sense, only observation and experience were available for him. His discovery was easier to reject than apply, years had to pass until Louis Pasteur drew up a bacterium at a conference to brightly demonstrate Semmelweis’s notion. “Now that we recall his figure and oeuvre after almost two hundred years, we can be proud that he was born Hungarian and made his ideas successful in our country,” said János Áder, adding that though triumph is often delayed, the doctor’s success came about: his discovery outlived him. Semmelweis “rewrote” the entire medicine, and disinfection has become the basis of medical interventions everywhere. That is why his place is among the greatest scientists – Louis Pasteur, Robert Koch, Joseph Lister or Wilhelm Conrad Röntgen – who laid down milestones, said the President of the Republic. He emphasized: in 2018, we nationwide remember the scientist, who never wished glory but served the humanity with all his vocation.

“The question arises: what is the cause of Ignác Semmelweis’s overwhelming acceptance”, said Dr. Ágoston Szél, Rector of Semmelweis University. The reason might be that we already know that he was not only the saviour of mothers but also the saviour of millions of people in surgery and hospital departments, he added. Recalling the naming of the university, Dr. Szél said that the choice proved to be perfect, as the university does not only operate under the aegis of an exceptional spirit but also the name and discovery of the scientist can be spread in the world. He pointed out that the university of medicine named after Ignác Semmelweis celebrates its 250th anniversary next year.

He said about the saviour of mothers: instead of publishing his findings in the relevant journals, Semmelweis simply stated that he was right and obliged others to follow his example, which did not really help to understand and accept his ideas – the rector explained. The contradictions of his personality and his early and dramatic death increased even more the gap between his brilliant discovery and the long-term rejection of his theses, highlighted Dr. Ágoston Szél. Fortunately, these gaps have disappeared and countless conferences, speeches, studies, sculptures and other works of art prove that the virtues and mistakes of Ignác Semmelweis are very important to medical society, he closed his speech.

Dr. György Kosztolányi, President of the Section of Medical Sciences of the Hungarian Academy of Sciences featured Ignác Semmelweis as the best-known Hungarian physician ever, who provided a simple but effective solution to the treatment of childbed fever, which provided important experiences for the doctors of the future. “Today we still feel the impact of his discovery, when in the midst of the so-called information tsunami and the huge amount of data that overwhelms us, brilliant and creative human thinking is extremely important. This is testified by the work of Ignác Semmelweis”, said the academician.

Several researchers remembered the results of Ignác Semmelweis at the Memorial Year Opening Ceremony Program. Dr. Zsuzsanna Jakab, WHO Regional Director for Europe, spoke about the legacy and impact of Semmelweis in relation to the global healthcare priorities of the 21st century. Dr. Jean-Marc Cavaillon, Researcher at the Human Histopathology and Animal Models Unit of Pasteur Institute, presented his speech titled “Hygiene versus contagiosity: the legacy of Ignaz Semmelweis”. Dr. Wolfgang Graninger, professor at the Vienna General Hospital, gave his presentation on human hands as a miracle and as a danger revealing the conflict between “common sense and academia”. Dr. Bernard Charpentier, President of the Federation of European Academies of Medicine, presented Ignác Semmelweis as a clinical investigator with a special view from the French Academy of Medicine, the Pasteur’s House. Finally, Dr. Thomas Schnalke from the Berlin Museum of Medical History spoke about the “hidden traces” in connection with Semmelweis’s work that we can still find today within the walls of the institution.